T-BONE CONTENT BUNDLE
– Get the style and the swagger of legendary hacker T-Bone Grady in the first Watch_Dogs 2 DLC bundle.
– T-BONE OUTFIT: Dress up Marcus with T-Bone’s signature look.
– T-BONE VEHICLE: Plow a path of epic destruction through San Francisco in T-Bone’s customized truck specially equipped to lift and annihilate vehicles, enemies, and anything else in your way.
– Fend off a new elite class of enemy as you’re assaulted with laser-guided grenade launchers, and raise the stakes with an all-new co-op difficulty mode.

HUMAN CONDITIONS
– 3 all-new World Stories, new Elite Co-op Missions, new Anti-Hacker enemy archetype.
– Dive into the dark world of science, medicine, and misuse as biotech takes center stage in 3 new World Stories.
– Hack your way through several hours of additional mission content, and uncover San Francisco’s biggest scientific scandals.
– AUTOMATA STORY: When TIDIS claims its one-of-a-kind biometric car is unhackable, DedSec sets out to prove them wrong. Along the way, they uncover a dark secret about TIDIS, their use of personal data, and the value placed on a human life.
– BAD MEDICINE STORY: On the trail of dangerous ransomware that threatens the city’s hospitals and DedSec’s reputation, Marcus and Jordy team up to take on the Russian mafia and recover the ransomware key.
– CAUSTIC PROGRESS STORY: Bio-hacker Lenni discovers a shady organization that’s experimenting on the homeless in exchange for medical care. Will DedSec and Prime_Eight be able to set aside their differences to take them down together?

NO COMPROMISE
– Expand your Watch Dogs 2 experience with an all-new World Story which mixes Marcus up in the seedy underbelly of San Francisco’s x-rated movie scene.
– MOSCOW GAMBIT STORY: Working to defend DedSec’s name and reputation, Marcus ends up in the crosshairs of the Russian Mafia.
– You’ll also gain access to an all-new Survival of the Fittest co-op mode, with a progressively increasing reward.
– Replay again and again to earn the best in-game items.

ROOT ACCESS BUNDLE
– THE ZODIAC KILLER MISSION: A killer is staging the bodies of his victims all over Oakland and taunting the police like the infamous Zodiac Killer of the Sixties. Decrypt the messages and hunt down the copycat.
– THE ZODIAC KILLER OUTFIT: Solve the Zodiac mission in style with new Zodiac outfit set.
– VOID DASHER CAR: This stealthy car will be harder for your enemies to detect.
– PESTE NEGRA CAR: This gang car is optimized for sporty and well-balanced handling.
– CHAMELEON COPTER DECAL: This furtive drone will help you complete your missions discreetly.
– DEFALT OUTFIT: Remember Defalt from Watch_Dogs? Wear a Defalt inspired outfit and show who’s the boss.
– PROTOCOL PISTOL: This gold-plated powerhouse is a must-have for gangsters and dictators around the world. The Protocol Pistol will tell them who’s boss.

FULLY DECKED OUT BUNDLE
– PIXEL ART: Complete outfit set, and a themed vehicle paintjob, weapon skin and RC decal.
– GUTS, GRIT AND LIBERTY: Trendy outfit set, including a themed car paintjob.
– THE TWITCH HOODIE: Another piece of clothing for Marcus.
– 5.000 DEDSEC FOLLOWERS: As a part of Twitch Hoodie Pack, you are also rewarded with 5,000 DedSec followers.

GOLDEN CITY BUNDLE
– SAN BRUNO RADIO TOWER location.
– It also unlocks a new co-op location where you and your friend can now undertake missions on scenic San Bruno Mountain.
– ENGINEER WORK OUTFIT: Includes a full set of Engineer themed clothing items, exclusive to PS4.
– SCOUTXPEDITION mission activity.
– This bundle allows you to cruise through the streets of San Francisco as you take a movie location scout to some of the city’s most iconic locations.
– New DriverSF mission: SCOUTXPEDITION.

MEGA PACK
– RETRO-MODERNIST, GLOW_PRO, RIDE BRITANNIA, KICK IT, VELVET COWBOY, BAY AREA THRASH.
– An additional premium collection that gives you several new styles to express yourself.
– Continue your Watch Dogs 2 experience as an unpredictable, but always stylish, hacking legend.
– Whether you want to show your appreciation for fine art, pay tribute to the classics, or take to the streets, this pack has you covered.

SUPREME PACK
– BLACK HAT, ELITESEC, GURU, DUMPSTER DIVER, HOME TOWN.
– An additional premium collection that gives you bang for your buck.
– Continue your Watch Dogs 2 experience as the unique hacker personality that you are.
– Hometown sports, hacker elite, or guru master, this pack reflects the wide range of personalities that make up the hacker world.

UBISOFT CLUB UPLAY REWARDS
– WHITE HAT OUTFIT: Cause a scene, disrupt the system, and create static in this stylish outfit. Contains a full set of unique clothing.
– GHOST RECON GEAR: Take the operation to the streets in this tactical team outfit. Contains a full set of unique clothing.
– FOR HONOR GARB: Some battles require an old-fashioned approach, so make sure you look the part. Contains a full set of unique clothing.
– CHERRY CUSTOM PAINTJOB: You can’t have your ride looking like it just rolled out of the factory, can you? Apply this custom paintjob to any vehicle.
– MAKESHIFT STUN GUN SKIN: People with advanced machining skills and a 3D printer will never go unarmed. Show your style with this homebrew Stun Gun skin.
– STARTUP FUNDING: With this $15,000 cash infusion, you’re ready to start building your own tech company. Or buy some guns and clothes. Whichever.
– RESEARCH BOOST: Breakthrough! DedSec’s teamwork has paid off. Get rewarded with 3 Research Points that you can immediately spend in the “Research App”.
– HIDDEN STASH: It’s always smart to have some extra cash hidden just in case you come up short. This is $15,000 set aside for you to spend guilt-free.

Play as Marcus Holloway, a brilliant young hacker living in the birthplace of the tech revolution, the San Francisco Bay Area.

Team up with Dedsec, a notorious group of hackers, to execute the biggest hack in history take down ctOS 2.0, an invasive operating system being used by criminal masterminds to monitor and manipulate citizens on a massive scale . 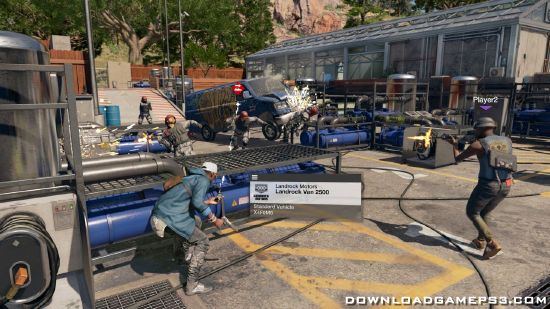 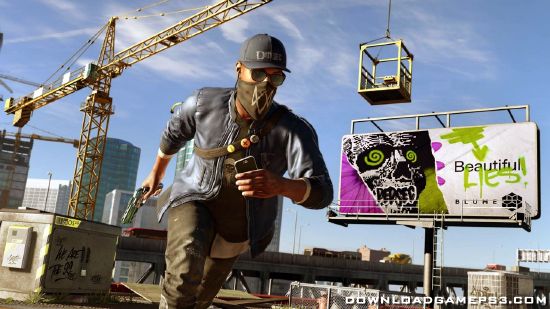 sorry never mind my previous comment it is the gold edition but i need to update the game version to 1.17 to work with dlc