Last released in 2008, The Last Remnant captured the hearts and minds of gamers with its enthralling story, countless characters and intricate battle system. Now this cult classic RPG is back with a Remastered version and is coming to Nintendo Switch with even more beautiful graphics, enhanced via an updated game engine.

There exists a world woven together by four races: Mitra, Yama, Qsiti, and Sovani.

In this world, mysterious objects called “Remnants” have existed since ancient times. Who created these objects? When? And for what reason? No one knew nor had the means to know, but continued to extract and use their colossal power.

However, the Remnants’ immense power gradually caused the world to fall out of balance. As further separation tore apart those who rule and those who follow, a war broke outthe beginning of a long and endless strife.

A command-style battle with ever-changing scenarios

Coming in contact with enemies on the field will trigger battles. Strategize and make full use of the commands that change constantly depending on the positions and state of friendly and enemy forces.

Morale of friendly forces greatly affects the outcome of battle

In battle, morale expresses the spirit of individuals and groups of both friendly and enemy forces. Higher morale has advantageous effects such as increasing the attack stat to deal more damage, or decreasing damage dealt by the enemy 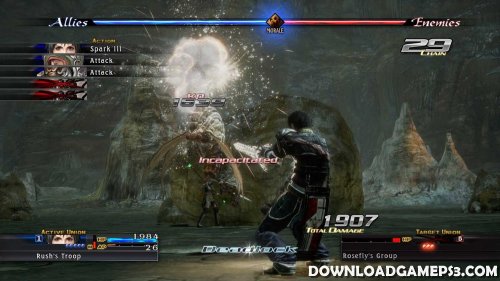 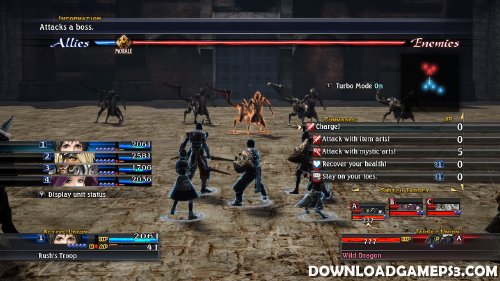 you use tool jdownload2 ?

Hey
Here’s a working back port for game version 1.03 (this is mine and just tested on 5.05) works fine
Install base game CUSA11846 – EU by @xmrallx
Install My backport update 1.03 (no need to install the update)

I’m half way through the game, it worked for me
Try to spoof to 8.03

I can’t downport correctly this game in 5.05 by any means. Anybody knows if it could be playable in 5.05?

How? if part 24 is corrupted and extraction cannot be completed.
reported by others as well. not that i’m seeing things
which link that worked for you please?

Yes, i’m getting an error stating that part 24 is corrupted, i downloaded the part again and tried but same error

send me link you use ! i will check it

The link has changed since then, did you replace the old one?I’m gonna download and test and report back here
Thank you

Part 24 corrupted in the new dumb, and been confirmed by the original uploader on Psxhax

The admin added a new link try it

I already installed it and it does not work, I am on 6.72.
Some help please.

Auto back port didn’t work on 505, i have no experience or knowdlge on how to do it manually
Admin are you dropping support for 5.05?

I tried to auto bakcport the update to 5.05 but no luck and i don’t have the knowdlge to do it manually

You can very easily just look up some Youtube videos on how to manual backport.

I did, all i found was related to the auto back port tool.

I heard that some did the backport with update 1.03 using autobackport 1.11 and it worked well. Have you already tried that?

Also, make sure the game file you have is around 11gigs and not 6gigs because that one was a bad copy.

Hey admin
Is there any email address or message system that we can use to contact you? i’m not gonna ask for requests, or any games, but i have a question and i don’t feel comfotbale here, because it seems that the comment section on your site is getting more and more aggressive, with bullies attacking and insulting other people and stuff, it started to feel uncomfortable even posting comments to ask a simple question about the game’s firmware requirements for example

this is the version to play, a huge improvement over the 360 version

6.72 autobackporter pkg does not fix. This will need manual backporting. Works fine 7.55. I am of course thankful!

Thank you, i was wondering myself (i’m on 505) but if it’s not playable on 6.72 then it’s not gonna work on lower firmware